All About Annual Growth Rings 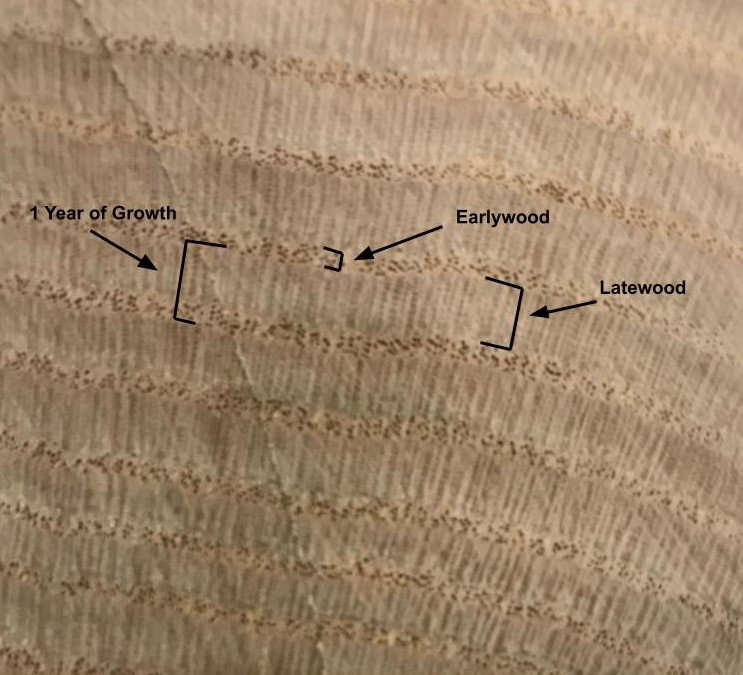 What Are Annual Growth Rings?

Annual growth rings are the circular rings found on the end of a log or tree stump. Each set of rings signifies one year of growth. Each year of growth has two distinct growing seasons: spring and summer.

In the spring, trees take advantage of all the moisture in the soil and conduct large capacities of sap. This wood growth is called earlywood. These cells are large in diameter and have thin cell walls. They are very light in color and easy to machine. You can easily see all of the open pores of earlywood with the naked eye. Before the tree was cut, all these pores were filled with moisture.

Less moisture in the summer thickens the cell walls and causes less moisture movement throughout the tree. Summer growth is called latewood. Latewood cells are smaller in diameter and have thick cell walls. They are dark in color and more difficult to machine. Latewood cells also have pores where moisture was stored, but they aren’t nearly as big. If you look close enough, you might be able to see some of the pores in the latewood.

So was that stump you were looking at as old as you thought it was? One year of growth equals one earlywood band and one latewood band of growth. So the next time you’re in the woods, make sure you count the set as one year and not two.

But this is where things can get tricky. Trees can develop a false wood ring. False wood looks like latewood but isn’t caused by change in season. It is caused by an early season of drought, late frost, or defoliation of the tree by insects. The false ring will interrupt the earlywood band, which creates an appearance of two years of growth and not one.

Annual growth rings develop during the growing processes of a tree. A tree grows in two different directions: height and diameter.

Trees first grow in height. The cells divide and elongate in the aprical meristem, aka the growing tips of twigs.

The second step of growth is diameter, and this is when the growth rings are formed. The cells divide in the lateral meristem known as vascular cambium, or just more simply as the cambium. The cambium is a thin ring, only one cell wide. Cambium division creates xylem (wood cells) and phloem cells (bark cells), but it always produces more xylem than phloem cells.

The cambium divides in two directions. Its first direction is parallel to the circumference of a tree. The cambium pushes a cell out and makes the diameter of the tree larger. This is called periclinal division. After the cambium pushes out a cell, it has to connect those cells together to form a ring. This is called anticlinal division and it divides at a right angle to the circumference of a tree. Both periclinal and anticlinal division occurs several times in a single growing season. This pushes the cambium outward, expanding the tree’s diameter. As the cambium divides and produces more xylem cells, defects become overgrown with the new wood cells.

What Are Annual Growth Rings Used For?

Annual growth rings are obviously used for determining the age of a tree. This is mostly used on trees in temperate forests. We can also see the way(s) the tree was affected overtime, by fires, other fallen trees, defoliation by bugs, or even just poor or surplus growing seasons. All of these impacts are shown in the growth rings. For example, in years of excess growth, latewood and earlywood will be larger compared to other years, and vice versa for years of drought. These things can also help date a tree. If you knew there was some catastrophic event that happened in the area of the tree, that tree would show those events, helping you put a date on when the tree sprouted.

Annual growth rings also help determine the specie of wood. Different species have different growing structures. Various structures are ordinarily visible on the cross-section (end grain). Somethings you might be looking for are how many cells wide the earlywood is, what kind of pore orientation it has, or are there wavy bands in the latewood. These things all help determine the different species of wood.

Finally, growth rings are used for identifying wood movement-related issues. Use this, for example. Crown moulding was shipped from Florida to Arizona to be installed in a home. The moulding sat on the construction site for a few months before actually getting installed. When it came time to install it, the contractor noticed that the pieces cupped and moved. Now most people would point the finger at the Floridian manufacture and say they machined it from wet wood. That would likely be the case considering the drastic climate differences between the two states. But there still is the chance that the lumber was too dry and swelled when it sat at the install site. We know the way lumber moves, so if the lumber were too wet, the board would cup in one direction, and if it were too dry, it would cup in the other direction.

Who would have ever thought that annual growth rings could be so complicated and interesting? They are more than just a cool feature that tells you how old the tree is. It’s a tool that woodworkers and wood scientists use every day. We use it so much that most people know to take a picture of the end grain when trying to determine the specie or resolving issues.

Thinning a Woodlot: How Do We Know Which Trees to Mark for Harvest?

I have been assisting landowners with the management of their woodlots for over 25 years. As foresters at Kretz Lumber Co. Inc., we spend most

Deciduous tree galls – What is happening to my tree?

It can be very alarming to see galls forming on a tree on your property, but in most instances they appear to be more formidable

4 signs you are working with the wrong lumber supplier

No matter what kind of project you are working on, if you start with low quality lumber, or the process to secure your lumber is

As an independent certified plan writer (ICPW) for the DNR, I work with a wide variety of landowners and forest types. While everyone knows you