Chaga Mushroom aka a Diamond of the Forest 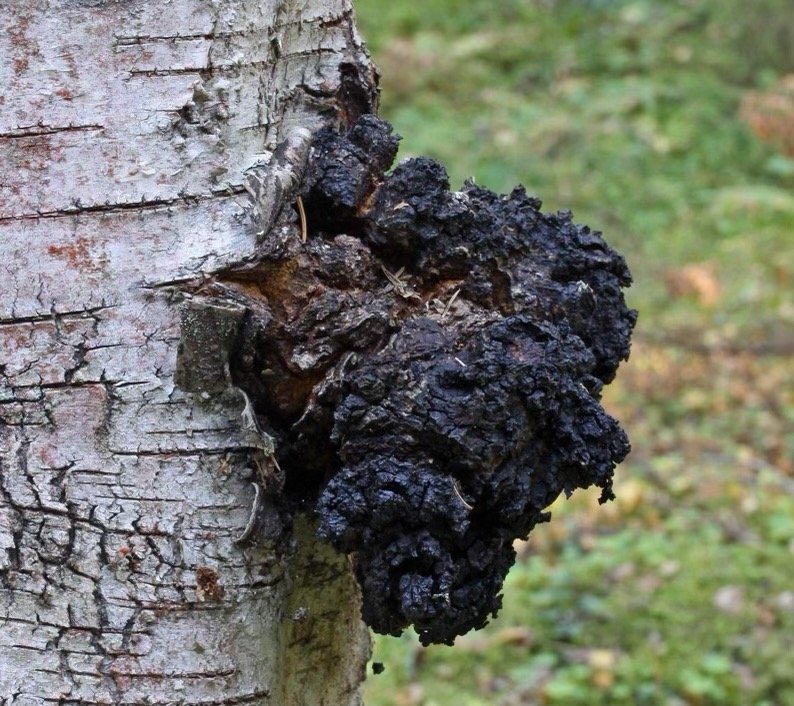 Chaga has been used to boost immunity and overall health for centuries in northern Europe. In recent years its popularity has been taking off in North America as well. This unique mushroom is rich in antioxidants, vitamins, minerals and nutrients that are known to have many positive health properties.

Inonotus Obliquus, commonly called chaga, is a fungus in the family Hymenochaetaceae. It is a parasite most commonly found on birch trees. The sterile conk is irregular formed and resembles charcoal. The spores enter the tree through a wound, particularly poorly healed branch stubs. Once the spores are established a conk will form and continue to cause decay and gather nutrients from the birch for the next 10-80 years. As the conk gathers these nutrients it also stores these and becomes a super center of vitamins, nutrients and antioxidants.

Chaga mushroom benefits have been proven in laboratory mice but nothing has been FDA approved to date. Some studies suggest chaga benefits may include: immunity boosting properties, ability to slow the progression of some cancer cells, enhanced digestion, lower blood sugar, slowing of the aging process, enhanced energy and endurance, reduced inflammation, improved cognitive function and memory, support for the adrenal glands, as well as reduced ldl cholesterol. There are many testimonies related to chaga therapy you can find online.

A harvest should only happen in winter during the mushroom’s dormant season, and preferably when there have been a few consecutive days of below freezing temperatures. It’s fairly easy to harvest with a hatchet. Just pop it off the base of the mushroom. It may take a few hits. Leave what remains on the tree because it will grow back within five years. It’s understood that you can have up to three harvests per mushroom if harvested properly.

To make chaga tea you should first let it dry. It doesn’t take too long and I’ve dried it over heat vents as well as just on the counter at room temperature. Chop it into small quarter size chunks. I take a large handful and throw it into a crockpot and steep with water on low. The next day it will look black like coffee. You can keep it on low but keep it covered so it doesn’t evaporate. I drink 1-2 cups per day. It has a unique earthy flavor. I put cinnamon or honey in it once in a while for sweetness and that also adds nutritional value. You can also put it in bottles and keep it refrigerated. You can keep using the same chaga many times over, make sure it is steeped and not boiled though. If boiled it can lose some of its medicinal properties.

In your forest look at your birch trees, white or yellow, to see if you have the diamond in the forest. Some of the best medicine could be right in your backyard! Remember to harvest only during the dormant season. Happy chaga hunting! It is fun to do and it gets you outdoors for yet another reason.

You an also make a tincture using your chaga mushrooms. Start by breaking the chaga down with a heavy alcohol. 100 proof higher grain alcohol or vodka work well. Refine your chaga into smaller particles similar to coffee grounds using a heavy duty grinder. The outer part of the chaga, called the chitin, has the hardest property known in plant life, hence a very good grinder is needed.

From there, I use a gallon glass jar and fill it halfway up with chaga grounds. I then take my alcohol and fill it to the top of the jar. Try to remember to shake it daily for three months. After three months I press out all the alcohol and put it aside. I then take the grounds and wrap about a handful in cheesecloth. I’ll put about three of these in my crockpot with water. Fill it to the top and steep. But this time, keep the cover partially open to evaporate the water. Steep it down three times per batch to about less than half left in crockpot. During the fourth cycle, I let the water evaporate to about half. Then, I start a new batch and repeat until I use all of the grounds wrapped in cheesecloth. I then take the alcohol I drained initially and add to the total batch. This is your tincture. I put it in 2 oz. small eyedropper bottles. I put a few drops under my tongue daily. Also, insider tip, keep the cheesecloth bags you used during this process. They work great for your daily tea.

Submit your best Wisconsin autumn photo! Get outside and share with us your best autumn photo. Enter our contest by uploading your favorite photo to

4 signs you are working with the wrong lumber supplier

No matter what kind of project you are working on, if you start with low quality lumber, or the process to secure your lumber is

In 1929 the Northeast Illinois Council of the Boy Scouts of America purchased an old logging camp near Pearson, WI, located about 25 miles northeast

How can a land management plan benefit your woodlot?

By Jim Kostrzewa, Forester, Kretz Lumber Company If you own wooded property, you likely have a list of goals you’d like your land to achieve.

The Surfaces of Wood and Their Properties

If you viewed our blog on different sawing patterns, you might have some more questions about the surfaces and their properties. In that blog, we