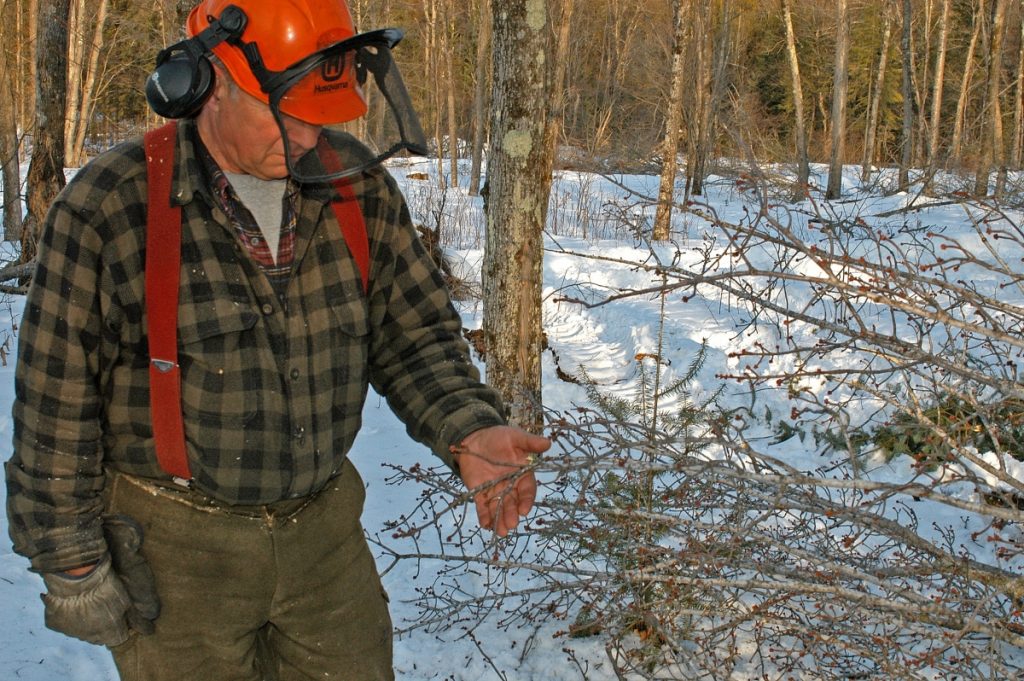 Whether he’s wielding a chainsaw in a cedar swamp or piloting an airplane above towering pines, Jim Hintz is seldom surprised by wildlife he sees in Wisconsin’s Northwoods.

Among Hintz’s most memorable sightings was a moose that wandered by one winter as he verified a property line with his GPS unit. Another time, two timber wolves watched him operate his bulldozer from 10 yards away as they rested in cool dirt that Hintz graded on a summer afternoon.

“The smaller wolf didn’t wait. It ran away,” Hintz said. “The big one stayed and those deer just overhauled him. First they stood on their hind legs and batted him with their front hooves, and then some of them turned and kicked like mules with their back hooves. I’m sure they broke his ribs. He was whimpering and yelping. He got kicked from all sides. When he finally got out of there, he was limping really bad and dragging a leg. I actually felt sorry for him.”

Hintz said the incident began while he was using his skidder, a heavy 4-wheel-drive vehicle, to move logs from a timber project near Spillerberg Creek northwest of Glidden in Ashland County. He had been cutting maple and yellow birch there all winter, causing hungry deer to congregate in growing numbers. He estimated they numbered 30 to 35 by mid-February that year.

Hintz said deer often eat within 8 feet of him as he trims fallen branches with his chainsaw or hauls 100-inch logs with his skidder. He’s the only human they tolerate. When the deer vanish, he knows visitors are approaching.

Hintz said he wasn’t surprised when the wolves appeared that day. He often saw their tracks among the deer trails weaving through the cut. But the deer also acted differently that day. About 25 of them stayed unusually close to his skidder, and the younger deer crowded in as if seeking protection. Hintz had to work slowly to avoid hitting them.

Soon after the wolves appeared, at least six adult deer — four adult does and two bucks without antlers – charged them. Hintz said two ran straight at the predators while at least four barreled down a nearby ridge.

“I doubt the whole thing lasted a minute,” Hintz said. “They were all over that wolf. If I hadn’t seen it myself, I’d think someone was telling a bald-faced lie.”

Nelson once saw a deer face down three wolves until they left, and Mech saw a deer leap over a wolf three times and mule-kick it each time it landed. Plus, they cited a case in which a wolf died after getting gored by a buck’s antlers, and another died after a deer crushed its skull with a kick. They also said wolves kill deer in only 20 percent of their chases. “People generally think wolves kill anything they want, but their success depends on the deer itself, and the wolf’s age and experience,” Mech said. “Deer usually aren’t aggressive, but I did see that one kick a wolf three times and chase it off.”

Hintz, meanwhile, didn’t see any wolves in the weeks after the incident, even though deer continued to pound paths into the snow to reach freshly cut treetops.

“Before the incident, I never saw wolves back in there,” Hintz said. “I only saw their tracks from where they nosed around the treetops at night, looking for rabbits. These deer looked to be in perfect shape. They were getting lots to eat. Maybe the wolves learned to leave them alone.”

About the author: Patrick Durkin is a free-lance writer who covers outdoors recreation in Wisconsin. Write to him at 721 Wesley St., Waupaca, WI 54981; or by e-mail at [email protected].

Ask a Forester: What is the best time of year to start a tree harvest and is there anything I should do to prepare?

Q: I’m looking to attract more wildlife so am considering the first tree harvest on my land. What is the best time of year to start

One of the greatest threats to Wisconsin forests is spreading rapidly and some experts consider it more destructive and dangerous than oak wilt, dutch elm

Logging can often be left behind as the topic of agriculture arises. As a result, opportunities to educate and raise awareness for the economic and

Hardwoods vs. Softwoods: What’s the difference?